Layers 7 through 4 comprise the upper layers of the OSI protocol stack. They are more geared to the type of application than the lower layers, which are designed to move packets, no matter what they contain, from one place to another.

Application Layer 7
This top layer defines the language and syntax that programs use to communicate with other programs. The application layer represents the purpose of communicating in the first place. For example, a program in a client workstation uses commands to request data from a program in the server. Common functions at this layer are opening, closing, reading and writing files, transferring files and e-mail messages, executing remote jobs and obtaining directory information about network resources.

Presentation Layer 6
When data are transmitted between different types of computer systems, the presentation layer negotiates and manages the way data are represented and encoded. For example, it provides a common denominator between ASCII and EBCDIC machines as well as between different floating point and binary formats. Sun’s XDR and OSI’s ASN.1 are two protocols used for this purpose. This layer is also used for encryption and decryption.

Session Layer 5
Provides coordination of the communications in an orderly manner. It determines one-way or two-way communications and manages the dialog between both parties; for example, making sure that the previous request has been fulfilled before the next one is sent. It also marks significant parts of the transmitted data with checkpoints to allow for fast recovery in the event of a connection failure.

In practice, this layer is often not used or services within this layer are sometimes incorporated into the transport layer.

Transport Layer 4
This layer is responsible for overall end-to-end validity and integrity of the transmission. The lower layers may drop packets, but the transport layer performs a sequence check on the data and ensures that if a 12MB file is sent, the full 12MB is received.

“OSI transport services” include layers 1 through 4, collectively responsible for delivering a complete message or file from sending to receiving station without error.

Layers 3 through 1 are responsible for moving packets from the sending station to the receiving station.

Network Layer 3
The network layer establishes the route between the sender and receiver across switching points, which are typically routers. The most ubiquitous example of this layer is the IP protocol in TCP/IP. IPX, SNA and AppleTalk are other examples of routable protocols, which means that they include a network address and a station address in their addressing system. This layer is also the switching function of the dial-up telephone system. If all stations are contained within a single network segment, then the routing capability in this layer is not required.

Data Link Layer 2
The data link is responsible for node to node validity and integrity of the transmission. The transmitted bits are divided into frames; for example, an Ethernet, Token Ring or FDDI frame in local area networks (LANs). Frame relay and ATM are also at Layer 2. Layers 1 and 2 are required for every type of communications.

Physical Layer 1
The physical layer is responsible for passing bits onto and receiving them from the connecting medium. This layer has no understanding of the meaning of the bits, but deals with the electrical and mechanical characteristics of the signals and signaling methods. For example, it comprises the RTS and CTS signals in an RS-232 environment, as well as TDM and FDM techniques for multiplexing data on a line. SONET also provides layer 1 capability. 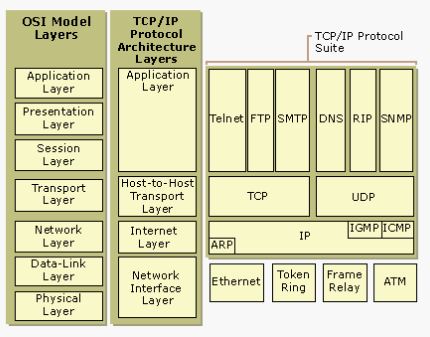 This site uses Akismet to reduce spam. Learn how your comment data is processed.

Get your free stock